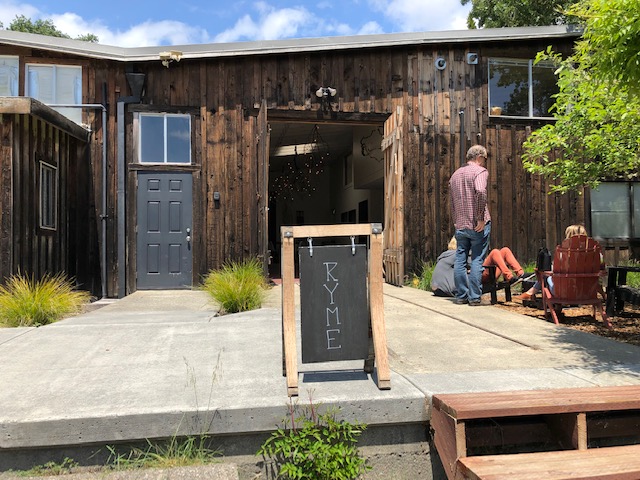 When you imagine California wine country, you probably don’t picture the Sonoma County town of Forestville.

It’s less than half an hour west of bustling Santa Rosa and the same distance south of upscale Healdsburg, but Forestville feels a world apart. Its downtown main street is only about three blocks long, hosting a handful of casual restaurants, a strip mall with a coffee shop and a laundromat, a county park with a friendly cat, a hardware store, a pharmacy, and a gas station.

There are also a few tasting rooms on Forestville’s main drag, but RYME Cellars is not one of them.

In this installment of Hidden Wine Country, I venture off the main street to a simple tasting room at the terminus of a dead-end road. I step inside what used to be RYME’s production facility (scroll down for a photo) and discover surprising wines made by a husband and wife team who aren’t afraid to go beyond the usual grape suspects.

Ryan & Megan Glaab started their winery in 2007 and christened it RYME, an amalgamation of their names. They began with one ton of the southern Italian aglicanico grape – a gutsy move in a state where cabernet, pinot noir, and chardonnay are king, queen, and prince.

“We don’t believe they are the most noble [grapes],” the couple writes on their website, “only the most popular.”

Megan and Ryan now source eclectic grapes from all around California. They’ve expanded their offerings over the years – they’ve even started making a little pinot and chardonnay. But they’ve kept their focus primarily on Italian varietals, vinified in an Old World style with a modern twist.

One of RYME’s most exciting wines is made from ribolla gialla, a white grape popular in northern Italy and Slovenia. Its history in California is particularly intriguing.

As the story goes, the late vintner George Vare smuggled a few cuttings into the country after his visits with legendary Italian producers like Josko Gravner. He planted them in his vineyard in Napa’s Oak Knoll district, which, until a few years ago, was the only known ribolla gialla vineyard in the western hemisphere.

Vare later started selling to a handful of other California producers. The list reads like a Who’s Who of the state’s new guard of experimental, low-intervention winemakers – people like Steve Matthiasson, Dan Petroski of Massican, Matthew Rorick of Forlorn Hope, and Nathan Roberts of Arnot-Roberts. (Some of those producers can be found around Central Florida – see below for tips.)

Ryan and Megan also receive about a ton of grapes from the vineyard each year, which they use to make an orange wine with eleven months of skin contact. Following Gravner’s example, they also age the wine in clay amphorae.

The 2016 vintage is beautiful and complex, with notes of apricot, cooked apples, honey, and yeast, framed by mouthwatering acid and nice tannins.

RYME’s “calling card” wine is made with the white vermentino grape, sourced from Las Brisas Vineyard near San Pablo Bay in Carneros. The fun story here is that Megan and Ryan disagreed about the style of wine they wanted to make with these grapes … so they decided to make two versions.

“His” vermentino – that’s how it’s labeled – is an orange wine (the current vintage was already sold out when I visited the tasting room in May); “Hers” is a clean, crisp Ligurian style wine. The 2017 has notes of pear and honeysuckle, with a mineral backbone but a soft mouthfeel and enough acidity to keep it lively.

The couple also makes a fun, light blend of sangiovese and friulano, inspired by the likes of Ruth Lewandowski’s “Feints” red-white blend.

The grapes come from adjoining blocks in Mendocino County. They’re picked together on the same day, fermented in whole clusters, and go through carbonic maceration. The 2018 has strong cherry notes with a touch of lanolin, framed by great acid and tannin. They serve it lightly chilled in the tasting room – perfect for a hot summer day.

And what about the grape that started it all?

The crisp 2018 rosé, released this March, is made with grapes from Clarksburg, just south of Sacramento. It has delicate aromas of flowers and celery, with cranberry notes on the palate.

The red Camino Alto aglianico comes from a vineyard 2800 feet up in the Sierra Foothills in the El Dorado AVA. It’s a powerful wine, with notes of dark and red fruits along with black pepper and plenty of tannins.

Attractive to the Wallet as well as the Palate

It’s not just the grapes and the winemaking style that make RYME a unique California find.

In a region where it’s hard to score a standard bottle for under $50, the most expensive thing on their tasting room list when I visited was a magnum for $55.

But here’s the catch – it’s not easy to find these wines. Ryan and Megan produce only about 2,500 cases a year, total. Many of their wines are allocated, and even those that aren’t tend to sell out quickly.

So it’s worth taking the trip off the beaten path to the tasting room at the end of the road in Forestville.

If you have a healthy sense of adventure, you won’t be disappointed.

4 thoughts on “Hidden Wine Country: RYME Cellars Turns Eclectic Grapes into Some of the Most Exciting California Wine You’ve Probably Never Heard Of”