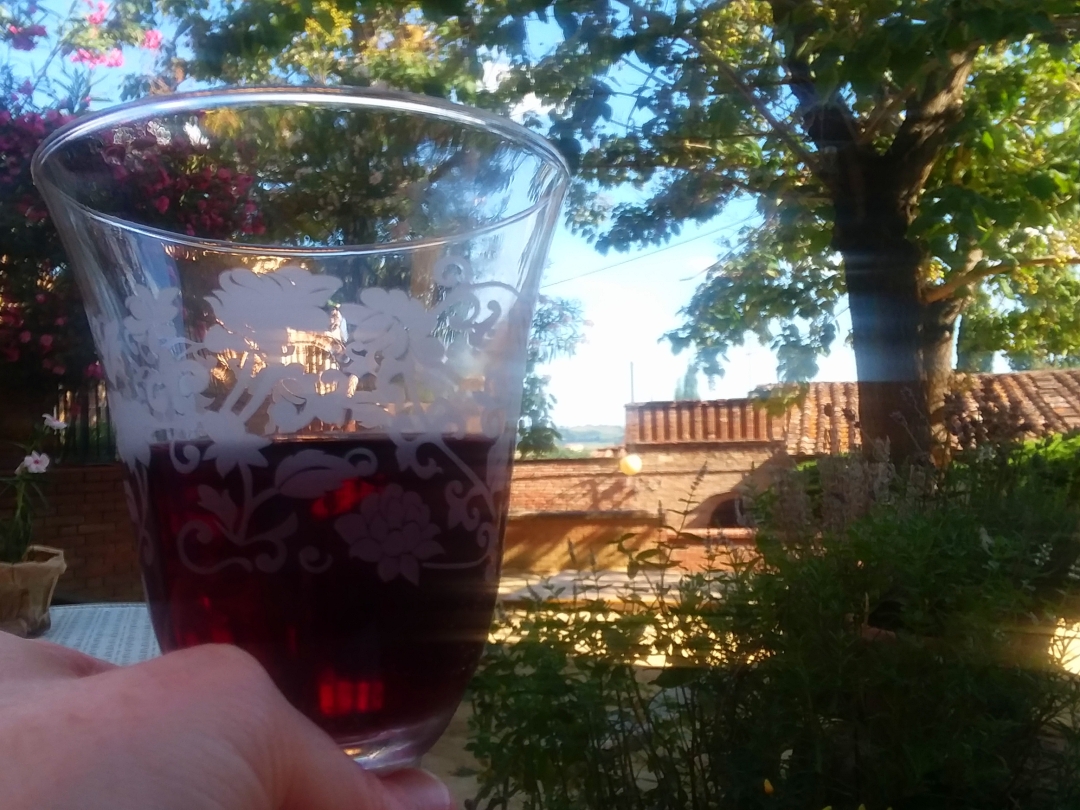 Top Five Experiences on an Italian Journey: The Exciting Conclusion!

In two previous posts, I started counting down the top five wine experiences from my recent trip to Italy. The trip was not focused on wine – I only visited one winery – but it did include a number of unexpected and delightful wine-related encounters that might not have happened on a highly-researched wine-centric itinerary.

The top two experiences on my list sit firmly in that category.

A few doors down from our hotel in Siena, I noticed a small storefront window with a sign that read, “Tuscan Wine School.”

I swear I had no idea it was there when I booked the hotel, but of course I went online to check it out. Turns out, it’s a small business that caters to foreigners who want to learn about the area’s wine and food.

I signed up for the “Tuscan Classics” wine class. Nobody else had registered that day, so what I got, through happy accident, was a one-on-one tutoring session with sommelier Riikka-Sofia Liukkonen.

We tasted through eight wines, comparing notes about wine culture in Italy and the U.S. along the way. I peppered Sofia with questions about the often baffling Italian wine classification system and the country’s web of regulations and plethora of grape varietals. She was extraordinarily generous with her time and knowledge. Before I knew it, the two-hour class had stretched to three.

As I left, she gave me a few Siena restaurant recommendations, I told her about the wine list at Berns Steakhouse in Tampa, should she ever come to Florida, and we promised to keep in touch. I came away having made a new wine friend … and feeling like I was finally beginning to truly understand Italian wine.

1. The Joy of a Winemaker

My Number One wine experience in Italy took place, not at a famous winery or an upscale wine bar, but in an unassuming courtyard in a largely-undiscovered Medieval village drinking a wine with no name.

It was our first afternoon in Tuscany, and we’d just arrived in the small town of Certaldo. We dropped our bags at our hotel inside an old castle and headed out to explore the cobbled streets of the ancient hilltop village.

A small courtyard off the main street beckoned to us. A few white garden tables were scattered around, surrounded by potted plants and herbs. Bright pink flowers framed an arched stone doorway.

Inside, we found shelves laden with homemade jams and spreads and a display case with bowls of fried squash blossoms, panzanella, and other prepared foods. Perched on top of the case were three bottles with a sign that read “Our Family Wine.”

I started chatting with the friendly young woman behind the case about her family’s cooking school and about their vineyards a few kilometers away. When I mentioned I wrote a wine blog, she rushed off to find her brother-in-law, the winemaker.

The young and charming Luca Leto came out into the courtyard and sat with us for a long time, talking about his family’s winemaking history as I sipped his wines. This Facebook post I wrote a couple of hours later says it all:

My first day in Tuscany since I fell in love with wine, and my heart is full. There will be many photos of amazing views and maybe amazing wines, but this one captures what I love about wine. 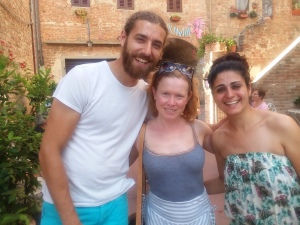 This is third-generation winemaker Luca Leto and his sister-in-law and self-described “head taster” Antonella. I found them tucked away in a little courtyard in Certaldo Alto, not far from Siena. Lucca’s grandfather once made wine in Montalcino, before it was famous for Brunello. When the family moved to the Certaldo area, they moved the rootstock with them. The wine he makes now can’t legally be described as Brunello, nor is that the style he’s going for. He wants to make Chianti as it was originally made – an easy-drinking, unpretentious wine that farmers made for themselves and their families. Lucca’s wine doesn’t even have a name, but it is very good – I had his Chianti and his 100% sangiovese rosato.

But what most impressed me was the enthusiasm and passion of this young guy, who could be living the fast life in Florence or Milan but who instead studied viticulture from the age of 14 and chose the life and art of his father, mother, and grandfather. You don’t see that every day.

As Luca and I were talking about the blend of grapes in his Chianti, he told me excitedly that he’s just started experimenting with single-varietal colorino.

His first batch is in barrel right now, he said. I would have to come back next year and try it.

Luca, I might just have to make that happen.

4 thoughts on “Top Five Experiences on an Italian Journey: The Exciting Conclusion!”