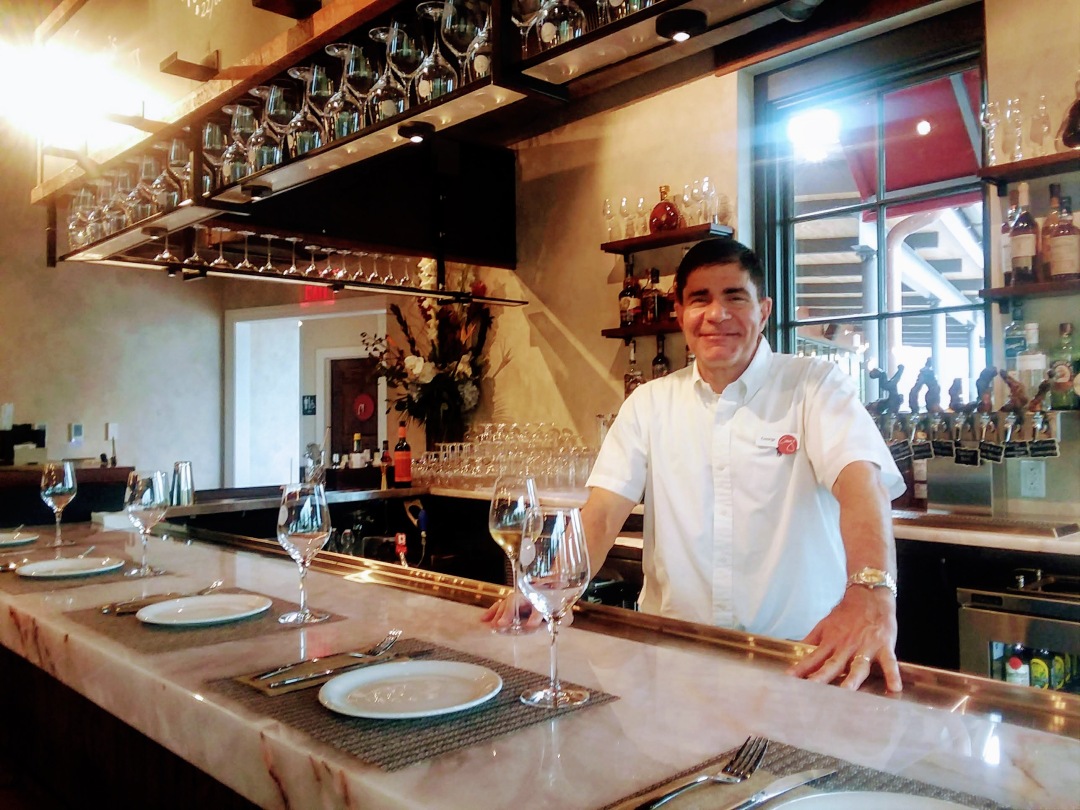 George Miliotes hasn’t been spending much time at his home in Orlando’s College Park neighborhood recently.

The Master Sommelier told me he’s been sleeping at the Lake Buena Vista Hilton since last Saturday, the day his eponymous wine bar opened for business across the street at Disney Springs.

Actually, he says he hasn’t done much sleeping, what with the 17 hour days he’s been working to get the long-awaited Wine Bar George up and running.

My husband and I dodged the raindrops last Sunday afternoon to visit the establishment on its first full day of operation (Saturday’s opening started at 5pm). Bottom line, this place is deliciously dangerous for wine geeks. If you are one, here are a few quick tips to make the most out of your experience:

Needless to say, we had a great time on Sunday. Standouts for me were the gorgeously oxidative 2013 Edi Simcic rebula from Slovenia, the surprisingly delicious (because I don’t usually love this region) 2014 Victorino tempranillo from Spain’s Toro, and the spectacularly dirty, funky, and geeky 2015 Angelini Paolo grignolino from Italy.

I found myself back at Wine Bar George a couple days later, this time to have a quiet chat with the bar’s namesake over a lovely bottle of Selbach-Oster 2016 Bomer riesling.

George Miliotes wanted to offer some explanations of a few idiosyncracies I’d pointed out about his wine list last week. First, he assured me, he loves Chinon, even though it’s not on his list, and he has no preference for Bordeaux over Rhone, despite his current Bordeaux-heavy offerings.

That won’t be the case forever, he promised. While he doesn’t plan any major revamps of the list, he assured me that incremental changes will come “early and often,” as new wines become available in the market and others spark his interest.

I’d also written of my surprise that his three Beaujolais selections included two from the cru village of Morgon and none from the other nine crus. His purpose, he explained, was to allow guests to compare the styles of two very different producers.

“I’ll have the same vintage, same piece of dirt, but two totally different philosophies on growing wine,” he said, with a wine geeky twinkle in his eye.

But how would a customer know that comparison was possible, I asked, if she wasn’t familiar with those particular producers? His answer illuminated a key tenet of his own philosophy of restaurant management: the servers should tell her.

George expects a lot from his servers and bartenders. He sees it as their job – not the job of the printed list – to draw those kinds of connections and to suggest food and wine pairings based on their own experiences, palates, and training.

In return, he promises them – and his customers – the benefit of his in-person wine knowledge on a regular and ongoing basis.

Most restaurants bearing the names of celebrity chefs – and there are quite a few within stumbling distance of Wine Bar George – seldom offer guests the opportunity to see or even eat food cooked by their namesakes.

George promises his establishment will be different.

His dedication to being onsite is as much for the sake of his 110 servers, cooks, and other staff as it is for his customers.

“It’s my obligation,” he said. “I brought all these people on and said we we’re gonna learn about wine. If I’m travelling, I can’t teach [them] about wine.”

That’s already meant an infusion of new blood into Orlando’s wine community, even at venues far from Disney property.

Swirlery‘s Blind Tasting Tuesdays have become a favorite stop for many Wine Bar George staffers, offering a time and place to study wine in a relaxed atmosphere and meet other folks in and around the industry.

“I give Melissa credit,” George said, referring to Swirlery owner Melissa McAvoy, a newly-minted Advanced Sommelier. “She’s done a very good job of getting people who’re passionate about wine wanting to come to her place.”

When George was going for his Master Somm pin, he recalls, there were only four people in Orlando seriously studying wine.

“I love the camaraderie that goes on in the [wine] community and the expansion of the community. It’s a thing of beauty,” he said. “To be a part of that keeps you on your toes.”

“A reflection of my personality.”

Right now, though, his new restaurant is what’s keeping him on his toes.

George says people are already asking him whether he’s planning to expand to other cities. He says that’s something to worry about “down the road.”

He’s plenty busy with his new location, and he’s excited about its potential, with plans for wine flights, casual education events with visiting winemakers, and maybe the occasional “cool” wine dinner.

It’s clear that Wine Bar George is more to him than just a business that bears his name.

“It’s a reflection of my personality,” he says. “I hope people come out and enjoy it because it is my statement on wine.”

Even so, he’s ready to go home and sleep in his own College Park bed pretty soon. He’s thinking maybe, just maybe, that can happen on Sunday.