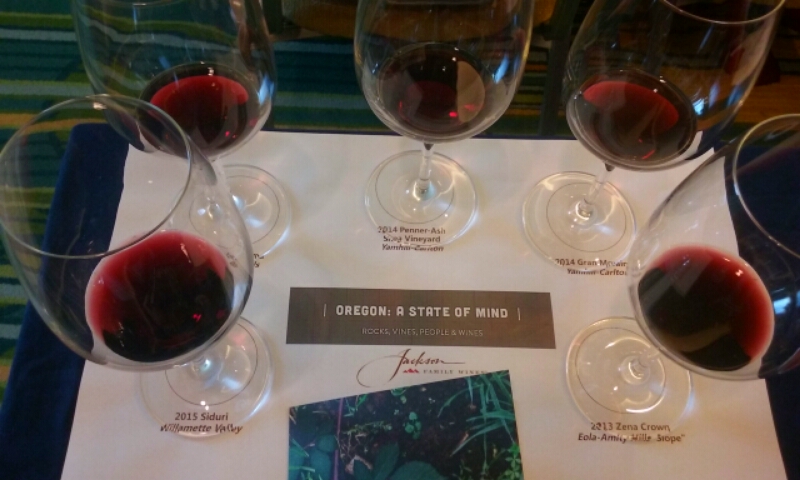 In Oregon,”you must be the master of your vineyard,” says Eugenia Keegan, General Manager of Gran Moraine Winery.

Speaking to a packed house at the Hilton Orlando on Tuesday, she and four other leading winemakers from Oregon’s Willamette Valley made the case for Oregon as a wine region unlike any other. Her compatriots on the Jackson Family Wines “Oregon: A State of Mind” tour included Lynn Penner-Ash (Penner-Ash), Ryan Zepaltas (Siduri, Zepaltas), Tony Rynders (Zena Crown, Tendril), and Craig McAlister (La Crema).

They have a valid point.

Oregon has been a major player in the wine game for almost 40 years, but much of the discussion about Oregon wines still takes place in the context of comparison – usually with the state’s giant wine neighbor to the south, or with Burgundy, the standard bearer for cool climate pinot noir.

The winemaker quintet from JFW gave a litany of reasons why the state defies those comparisons.

Keegan’s “master of your vineyard” statement was an expansion on the oft-repeated point that Oregon’s climate is much more challenging than California’s. There are greater fluctuations from day to day and from vintage to vintage. A vineyard manager has to walk his vineyards every day, the winemakers said, to keep on top of things.

Lynn Penner-Ash also pointed out that Oregon’s northern latitude also means more hours of daylight than California during the growing season. But, she added, it’s cooler at the end of the season, so the grapes can get more hangtime without their sugar content getting so high that the alcohol level of the resulting wine gets out of control.

As for Burgundy, well, who wouldn’t want to be compared to Burgundy? Still, the winemakers pointed to a unique “fresh” and “crunchy” quality that sets Oregon wine apart even from that storied region. JFW’s Gilian Handelman compared it to the sensation of biting into a just-picked plum.

Pinot noir is by far the dominant grape in Oregon – it makes up 60% percent of the state’s wine production. We tasted pinots from each of the five winemakers on the panel.

Of all the wines, the 2014 Penner-Ash Shea Vineyard Yamhill-Carlton best embodied that fresh, crunchy quality Handelman described. I found it to be a fascinating wine. In addition to the fresh red fruit notes, there was something strangely intriguing that I finally identified as being reminiscent of Sweet-Tarts – remember those candies from your youth? – even though obviously, the wine is dry. Lynn Penner-Ash said she used less new oak in this vintage than usual, and I was happy for that decision – it really let the fruit character shine through. Like all high quality wines, it was a little different each time I came back to it. I’m still thinking about it, wishing I could have another sip.

Another favorite was the 2013 Zena Crown Slope Eola-Amity Hills. Jackson Family Wines bought Zena Crown vineyard in 2013. It was the company’s first Oregon venture, and the 2013 was its first release. This is a very different wine from the Penner-Ash – not surprising since the soil there is volcanic, as opposed to the Shea vineyard’s sedimentary soil. It shows darker fruits and enticing herbal qualities that become even more pronounced as it opens. I was surprised when winemaker Tony Rynders said this wine saw 85% new oak. I didn’t detect an overwhelming oak influence. It all made sense when he explained that he uses barrels that have been seasoned for at least three years – a year longer than the standard – and that are “more elegant” than some of their counterparts. (Melissa McAvoy of Swirlery Wine Bar was sitting next to me at the tasting and tells me she has a few bottles of Zena Crown pinot in stock.)

I was very curious about the 2014 La Crema Dundee Hills. La Crema released its first Oregon wines in 2014, but I’ve been shying away from them because the producer’s California pinots, while wildly popular, are too heavy and jammy for my taste. I wondered if La Crema had stuck to its tried-and-true formula for its foray into Willamette or if it had embraced the lighter, more elegant Oregon ethos. As it turned out, the winery weighed that question too. “We were careful not to make a California wine in Oregon,” said winemaker Craig McAllister, but, he said, he had to make a wine La Crema fans would like. With the 2014 Dundee Hills, I’d say he struck a happy medium. It’s creamier than the other four pinots we sampled but certainly more elegant than La Crema’s California offerings.

Rounding out the group were the 2014 Gran Moraine Yamhill-Carlton and the 2015 Siduri Willamette Valley. The Gran Moraine showed darker fruit and a dusty quality, in addition to being a good example of the crunchiness discussed earlier. To my palate, it showed the most oak influence of all the wines. The Siduri is a blend of grapes from different vineyards around Willamette Valley, with cranberry notes, as well as cinnamon and brown sugar from French oak aging.

The second most-planted grape in Oregon is pinot gris. While that’s the same grape as pinot grigio from Italy, the two are very different animals … and I’ll take the Oregon option any day of the week. At the reception after the panel discussion, we tried a nice pinot gris from one of Jackson Family Wines’ newest acquisitions, WillaKenzie Estate.

The reception also gave me an opportunity to chat with Lynn Penner-Ash about some of her other wines, including her riesling, syrah, and viognier. Matt Coltrin of The Parkview in Winter Park was there too and was waxing poetic about the viognier. I’ll be stopping by his establishment to try some as soon as I can.

Lynn was engaging and down to earth, as were the other winemakers I talked with one-on-one one. That makes sense when you think about it, because in Oregon, as all of them emphasized, people who make wine must be very close to the earth indeed.