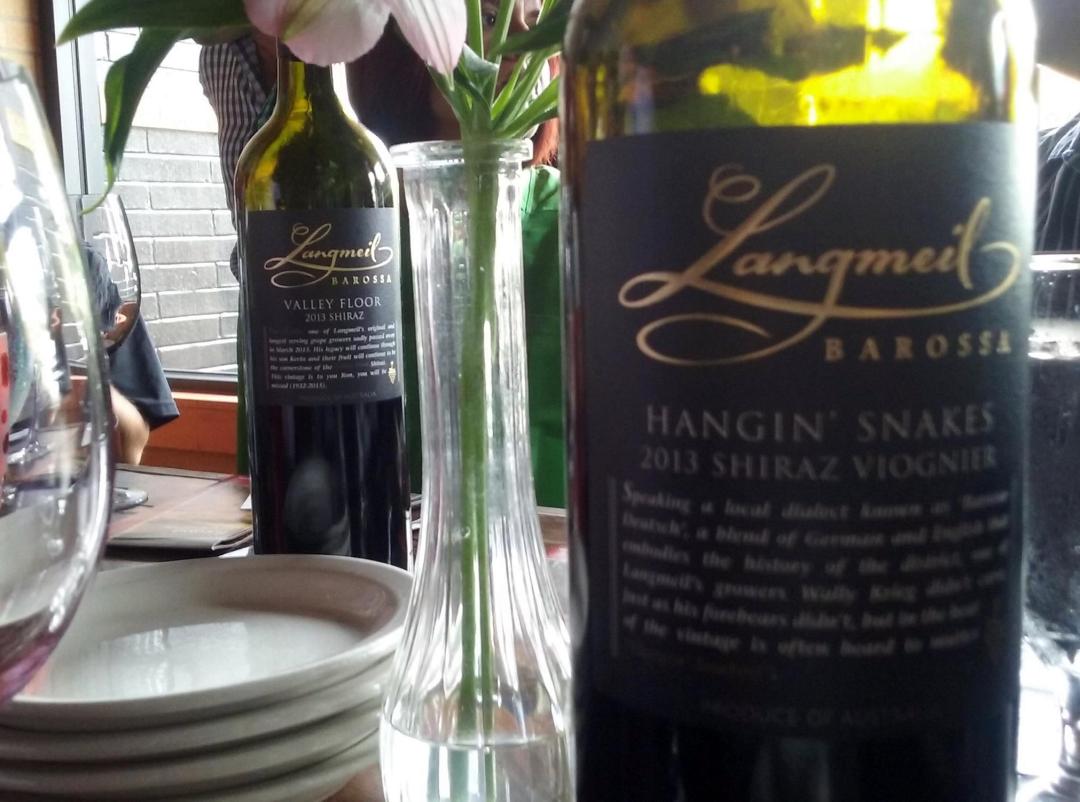 Australian wines are rarely my first choice of libation. As for Aussie reds – well, I’d have a hard time remembering the last time I bought one. I’ve encountered too many examples that are too jammy, fruity, and one-dimensional for my taste.

But, as I’ve written many times before, I make it a point to keep an open mind and never to make blanket statements about “wines I don’t like.” There are always exceptions, and I love finding them. When I was invited to a small tasting with James Lindner of Langmeil Winery I was intrigued to see if he could show me one.

Over a lunch of Spanish tapas, James charmed a small group of Orlando wine industry types with his Aussie humor and stories of the vineyards and winery he owns with his parents and brother.

He was eager to prove that Australian wine is more than just the mass-produced, one-dimensional stuff that flooded the U.S. market when Aussie shiraz suddenly became en vouge awhile back.

Langmeil’s property boasts some of the oldest vines in Australia’s famed Barossa wine region, and indeed, some of the oldest in the world. James and his family produce wines of all colors and types, but at our tasting, he focused solely on the reds – eight of them, to be exact! Since they aren’t widely available in many parts of the U.S., I’ll briefly share my impressions of each.

Valley Floor Shiraz
There’s no denying this wine is 100% Aussie shiraz, but it’s more elegant than many and lacks that cloying jamminess that tends to turn me off.

Still, I prefered the …

Hangin’ Snakes Blend
This wittily-named shiraz includes just a splash (4%) of viognier. The addition of even that amount of the white grape adds a lovely floral quality – purple flowers on the palate – and a lightness that I found very appetizing. This is not an intellectual wine, but for an easy drinker, it’s lovely.

Three Gardens GSM
For a New World wine, this blend of grenache, syrah, and mataro (the local name for mourvedre) has a nice Old World funk on the nose, plus some notes of cranberry and meat. It had enough acidity to make me wish the tapas wasn’t taking so long to come out of the kitchen!

Blacksmith Cabernet
Langmeil calls cabernet “the unsung hero of Barossa wine.” This example, named after the vocation of of the the original owner of the property, reminded me a little of Chilean cabs, with lots of pyrazines in the form of green pepper on the nose and palate (you can read more about pyrazines here), along with some red fruits.

Then it was on to the big guns from Langmeil’s premium collection, which it calls “Old Vine Gardens.” These wines come from vines that are among the oldest in the world.

Fifth Wave Grenache 2010
Made from 70-year-old vines, this was one of my favorites of the tasting. It has a beautiful brownish-orange hue with tart red fruits on the nose and palate. It’s an elegant and lovely wine.

Jackaman’s Cabernet 2014
This single-vineyard cab comes from vines planted in the 1960s. Like the Blacksmith cab, this one has a few green notes, along with red raspberry and earth.

Orphan Bank Shiraz 2014
Made from 96-year-old vines, this is classic Aussie shiraz but, as I wrote in my notes, “not in a bad way”! It boasts tons of blueberry and smoke on the nose and palate with great acidity.

The Freedom 1843 Shiraz 2014
James Lindner saved the headliner for the end of the tasting, and it was a stunner. Langmeil believes its Freedom plot is the oldest surviving pre-phyloxera shiraz vineyard in the world – “1843” refers to the year the vines were planted. The wine produced from those 173-year-old vines has a smoky, almost port-like nose with notes of brown sugar. The palate echoes the smoke and burnt sugar, with red fruits rounding things out. I’d love to taste this wine a few years down the road!

I came away feeling that James had proved his point. Meticulous, old-school, labor-intensive wine methods allow Langmeil to show what Australian wine can and should be. There are many of these wines I’d be happy to order in a restaurant or buy in a wine shop, should I have the opportunity. I hope you have a chance to check them out too!