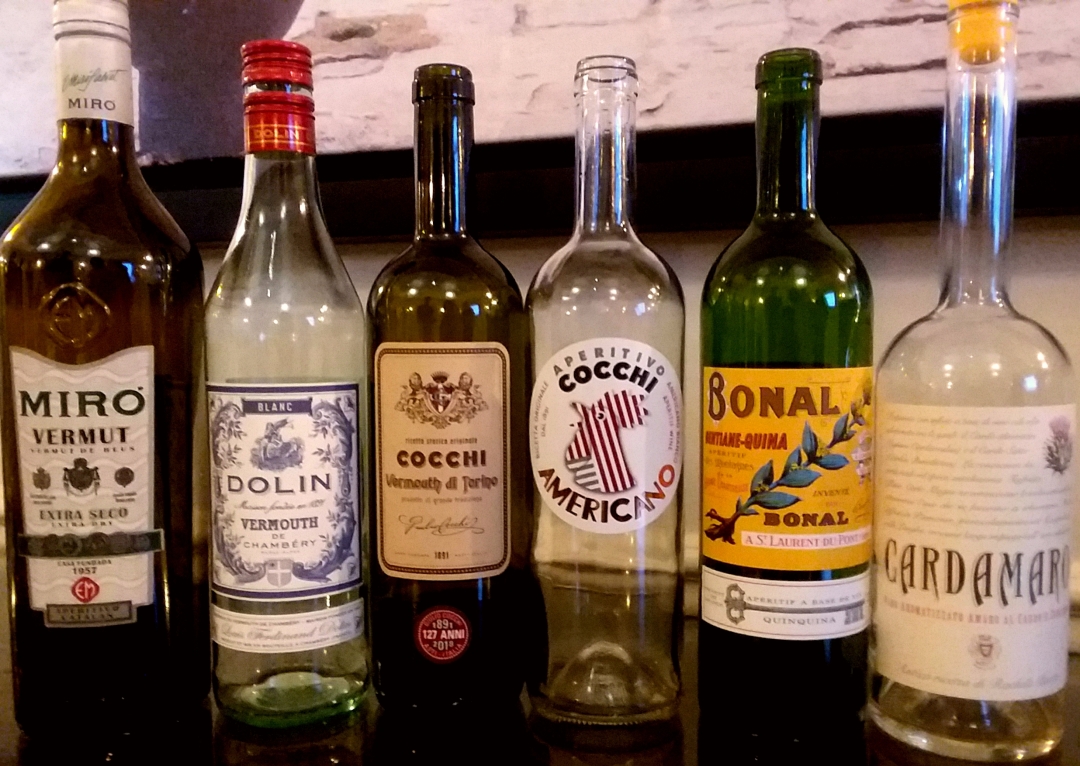 You may have never heard of “aromatized wines,” but if you’ve ever had a martini or a Negroni, you’ve enjoyed them. You’ve also experienced this ancient beverage category if you’ve ever ordered a craft cocktail with “Cardamaro” or “Cocchi Americano” buried in its long list of ingredients.

By definition, aromatized wines are fortified wines (think Port and Sherry) flavored with herbs, spices, bark, flowers, or just about anything else you can find in a forest.

Cardamaro and Cocchi Americano are both aromatized wines, as are the vermouth in your martini and the Campari in your Negroni. (Campari is a brand of amaro, which falls within the broader aromatized wine family.) Seriously, this stuff is like science class … but studying it is a lot more fun!

Orlando’s Master of Wine Jean K. Reilly, who runs Slate Wine & Spirits Academy, hosted a class on aromatized wines last week at Norman’s at the Ritz Carlton. The presenter, Rob McCaughey, is a jovial Brit now based in Charleston, SC, who works on the spirits side of the WSET (Wine & Spirit Education Trust).

As he explained it, these beverages start with a wine grape (often something neutral like trebbiano), then add a neutral spirit, followed by a sweetener, then something bitter (that’s where the roots and herbs come in), and finally an imaginative combination of flavoring agents (fruits, flowers, oak, etc.).

We tasted six very different examples of aromatized wines. Each was fascinating, complex, and delicious. If you’re coming from a wine background, you’ll find they light up different parts of your brain than the wines you usually taste.

There’s the bone-dry Miro Vermut de Reus Extra-Seco from Catalunya in Spain, with aromas ranging from curry to white flowers to menthol. I even smelled something that reminded me of the sachets of dried evergreens I used to get at summer camp in New Hampshire.

The Cocchi Vermouth di Torino from northern Italy was another standout. It smells of cinnamon, orange peel, and cloves  … and it tastes like Christmas!

The Bonal Gentiane-Quina from France has an enigmatic a nose of orange marmalade and black olives.

And the Bosca Cardamaro from Milan might’ve been the most complex, with aromas of dusty bark, dried leaves, cocoa powder, dried purple flowers, and dark cherry.

Cocktails for the Wine Drinker

These tasty beverages – not quite wines but not quite spirits either – help oenophiles cross the divide into the cocktail world.

I first encountered aromatized wines at Tim’s Wine Market in Orlando a couple of years ago, when owner Tim Varan started his “Raise Your Bar” program. He began stocking a selection of vermouths, amaris and other wine-based spirits. To show them off, he and his staff created low alcohol cocktails, known as “shims,” for customers to sample.

I was skeptical. I tend to shy away from cocktails because I don’t enjoy the heat from the higher alcohol spirits. But these drinks were perfect for me.

Most aromatized wines are sweet, but not all of them, as evidenced by the Miro, described above. They range from 15-22% alcohol by volume – the ones listed above are between 16% and 17%. And while they’re usually used in cocktails, many of them can stand on their own, with just a splash of soda or bubbles.

Rob McCaughey suggested reversing the proportions on classic cocktails like Manhattans to highlight the vermouth instead of the harder spirit. Personally, I’m partial to a simple spritz made with an aromatized wine called Cappelletti, sparkling wine, and an orange twist. It was a hit at a holiday party one year with some of my geekiest wine friends.

You can spot aromatized wines on many cocktail lists around town, and a few places are starting to let them take center stage. I was recently pleased to discover, for example, that Sanford’s Bitters & Brass has a whole section of amari cocktails. Keep your eyes out, and I’m sure you’ll find a few more – let me know what you discover!

One thought on “Aromatized Wines: Where wine and cocktails meet”