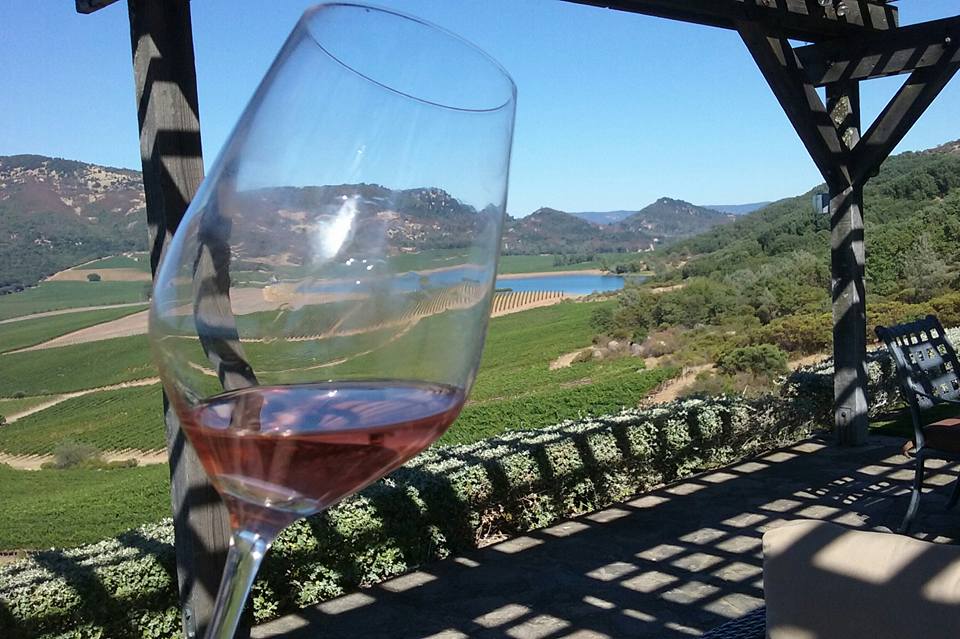 About this series: After years of loving (and semi-seriously studying) wine, I finally took my first trip to Napa and Sonoma this summer. It was a wonderful week of sunny days, cool nights, beautiful views, and beautiful wines. These are the impressions, discoveries, favorites, and surprises from my journey.
Read Part 1: Chateau Montelena, CADE, Pride
Read Part 2: Frog’s Leap, Heitz, Mumm Napa

If Monday focused on well-known wineries in the middle of the action, Tuesday was the opposite. From a tiny boutique outfit tucked away in an office park south of downtown Napa to the little-known Atlas Peak outpost of a storied Italian wine family, this was definitely a day of discovery!

Looking at Y. Rousseau’s office park suite from the outside, you could be forgiven for thinking it was more suited to a dentist’s office or an internet startup than a place where great wines are made.

But you’d be wrong.

Yannick Rousseau is originally from Gascony in southwest France. He moved to California in 1999 and started this small winery with his wife nine years later. He produces only 2,000 cases of wine a year, much of it from the grapes he fell in love with as a student of winemaking back home.

I was fortunate enough to have a private tasting inside the cozy barrel room (by which I mean it’s small, not warm!) hidden inside that unlikely location. I was warmly hosted by “Chef de Bureau” and fellow blogger Olga Mosina.

We started with the 2015 colombard, a white grape that is, like Yannick, native to Gascony. He sources these grapes from a 45-year-old vineyard in Sonoma’s Russian River. It’s a lovely, refreshing wine, with stone fruit and tropical notes balanced by good acidity and minerality.

Yannick is also very partial to the tannat grape. In France, he studied and worked with superstar winemaker and fellow Gascony native Alain Brumont of Chateau Bouscasse, who helped tannat become a respected varietal.

Yannick even makes a rose of 100% tannat – one of only two I could find being made in the U.S.

Y. Rousseau’s 2015 rose is a lovely, light pink wine with notes of watermelon and a mouthfeel that manages to be creamy but still refreshing.

Yannick’s 2012 tannat reserve uses grapes from a 2500 foot high vineyard in Mendocino County. It’s full of blue and black fruit with high tannins that are smoothed out by the 20 months the wine spends in 85% new oak.

After lunch at Napa’s famous Oxbow Public Market, we headed up. Way up.

High on the slopes of Atlas Peak sits the picturesque winery and vineyards of Antica. This is the California project of renowned Italian winemaker Marchese Piero Antinori. The name of the winery is, in fact, a combination of the words “Antinori” and “California.”

The experience here started with a short tour that included an overview of the estate’s history and a quick glimpse inside the caves. This was the closest thing we had to a standard tourist experience on our whole trip, but that’s mainly because our tour included an actual tour group disgorged from a minibus. I’m sure that made things seem a little more mass produced than they might’ve otherwise.

After the tour, we all moved over to a lovely terrace for the tasting. Parties were seated at individual tables, which made things feel a lot more intimate. We were served a nice array of cheeses, bread, and house olive oil. Then we sampled five wines: 2014 rose of pinot noir, 2014 chardonnay, 2013 sangiovese, 2013 estate cabernet, and the 2013 Townsend Vineyard cabernet.

Given my interest in unexpected grape varietals and given the great Chiantis I’ve had from Antinori, I was curious what a Napa-grown Antinori sangiovese would be like.

The answer: it does have whispers of Italy, with a tiny hint of sweet red tomato on the nose. There are also notes of red fruit and baking spices with plenty of acid to balance things out.

The staff said sangiovese was an experiment for the Antinori family. Antica only grows 16 acres of the grape, only makes 100 cases, and only sells it at the winery.

Failla: A Napa Winery with a Sonoma Soul

After you’ve been in Napa for a few days, you might find yourself getting a little tired of big cabernets. A visit to Failla will be a refreshing change. This small winery doesn’t make a single cabernet. Its focus is pinot noir, and there are six on its current release list.

Failla sits just off the Silverado Trail, right across the street from Rombauer – a winery known known for big, oaky chardonnays and cabs – but most of Failla’s grapes actually grow in Sonoma, and its wines are the opposite of big and oaky.

The standard tasting takes place inside the winery’s cozy lodge. It was a quiet day (as I’ve mentioned previously, the crowds of tourists we were told to expect never materialized on our trip), so we ended up getting a private tasting.

We started with a chardonnay. It was the only Failla wine we tried that was made with Napa grapes, and even those came from Carneros at the southern – and coolest – end of the valley. Only 25% of the wine sees new oak, so you can smell and taste the fruit, with notes of lemon, apple, and honey. The cool climate grapes provide a good level of acid to the wine too.

My favorite wines of the tasting came from Fort Ross-Seaview, an AVA created just four years ago, carved out of the much larger Sonoma Coast AVA. This small area is very close to the Pacific and high enough in elevation to be above the fogline.

Failla has a vineyard there that provides grapes for its 2013 estate pinot noir. This wine has the red fruit flavors of a traditional pinot, but it’s the nose that’s really fascinating. You can smell the sea in this wine! I’ve mainly experienced that in whites, particularly muscadet, but the briny aroma and the scent of green olives was unmistakeable, making the wine very enticing.

Failla also grows syrah on its Ft. Ross property for its lovely 2013 estate syrah. I know you’re supposed to smell black pepper in syrah, but I usually don’t. More often, I get smoke and meat, which are also characteristic of the varietal. The Failla syrah was smoky, but it was the black pepper that really jumped out at me – not in a jarring way but in a very enticing one. It made me want to take a sip, and I’m glad I did! It’s refreshingly light bodied for a syrah, a varietal whose Napa examples tend to be a little heavy for my taste.

Ok, this one is partially true.

There’s no doubt that you have to pay more for quality in California than you do in the Old World. Some of that is down to the extremely high cost of property in Napa and its surrounding area. I’m sure much of it is also due to demand, prestige, and consumer willingness to pay for wine from a region that’s become synonymous with high-end wines.

I doubt you’ll find a cabernet here for anything that the average non-collector would call a bargain.

But there are reasonably priced wines to be had here. The Y. Rousseau colombard is only $20; we took home a bottle of the tannat rose for $25. The Frog’s Leap Heritage red blend I wrote about in the previous post is $35; their rose is $20. If you keep your eyes, mind, and palate open and you’re willing to try some of the less common varietals – the stuff I really like anyway – you can take home plenty of bottles that won’t break the bank.